The story of Timbermare: 'Magic: The Gathering' doesn’t forget In early 2007 the Planar Chaos expansion came out. While there wasn’t too, too much unusual about it, Planar Chaos did come with a card with a secret: Timbermare. 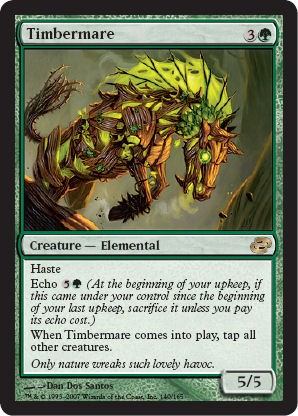 At face value it may just seem like a decent creature: A 5/5 green horse for four mana with some decent moves.

But then you look at the little details: horses have always been white -- never green. The flavor text seems oddly worded. And what was up with the name? Yes, it's a turn on Thundermare, but even for Magic it seemed kind of contrived.

When some players asked the Magic team about it during pre-release they got a surprising answer - it was actually a tribute to a professional player and writer who had passed away from ovarian cancer.

Jamie Wakefield was a pro player who always played a green deck with powerful creatures that would relentlessly hit the opposing player. His wife, Marilyn Wakefield, was well known around around tournaments with Jamie. She absolutely loved horses, so she got the nickname “Mare” as a result. After she passed away in 2006, the folks at Magic decided to honor for for him.

For Jamie, he was humbled by the gesture from MTG, as they made a card that he not only liked and could play, but because of the connection it had to his wife.

“ It was Green, so I could play it,” said Wakefield. “It was a fattie. And it was a mare. One thing you might not know is how much Marilyn loved horses in the games we played. She has screenshots galore of her characters standing with beautiful horses.

So it's not only that a Magic card mare is a tribute to her... it's the fact that she is immortalized in horse form.”

That pretty much explains it - it was all just subtle enough so that those in the know would truly understand and appreciate it.

But what about the ‘lovely’ wording? Well according to Mark Rosewater, “The rules text only left one line (and a short one at that due to the power/toughness box) and I probably wrote fifty plus lines trying to fine one that I felt was worthy of the card. Getting the word "lovely" in was definitely a challenge.”

For pretty much the largest card game out there, Magic: The Gathering has not only shown that it cares, but it cares in both some of the sweetest and most awesome ways possible.

More in this category: « Purple And gold : How the first 'Magic' expansion nearly changed the game's look forever Beaten by 'Monopoly' and Stretch Armstrong: The first attempt at a 'Magic: The Gathering' movie »